Body language can add another dimension to your dialogue scene, because it reveals a person’s intentions, feelings or mood.

She pointed to the orchard. “I saw him there.”

He slammed his fist on the table. “I’ve had enough.”

She scratched her chin. “Are you sure this will work?”

“Welcome.” He pointed to the couch. “Why don’t you make yourself comfortable?” 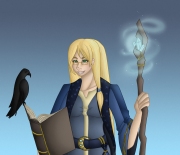 She raised her chin. “You can’t make me do this.”

He locked his arms across his chest. “No way.”

She leant away from him. “This isn’t working between us.”

“I consider this an insult.” He stood with his shoulders squared and his legs braced. “Take it back.”

“Maybe another time.” He turned to leave.

She walked faster. “I told you I don’t want a date.”

“All right.” He shuffled forward.

Her eyes narrowed. “You expect me to believe this?”

His cheeks turned tomato-red. “What do you mean?”

The corners of his eyes crinkled, and his lips twitched. “Really?”

“We will stand together in this.” His voice was deep and resonant like a church bell.

“I’ve told you a hundred times, and I’m telling you again.” Her voice sounded like a dentist’s drill, high-pitched and persistent. “Why don’t you ever listen?”

“You know that I’m going to kill you, don’t you?” His sounded as casual as if he were discussing the weather. “Do you prefer a shot in the heart, or the head?”

“You’ve been with that floozy again, you cheating bastard!” Her voice was loud enough to wake up the whole neighbourhood.

Body Language instead of Dialogue Tags

Using body language  allows you to cut boring dialogue tags (he said, she asked, he answered) because it shows who’s talking.

“What about the girl?” he asked.

“Bastards!” she shouted. “I won’t let you get away with this.”

“What now?” he wondered aloud.

He jerked his chin at her. “What about the girl?”

“Bastards!” She slammed her fist on the table. “I won’t let you get away with this.”

He scratched his head. “What now?”

Most people aren’t aware of their body language. Therefore, use body language for the character who is not the PoV.

If the body language is intentional, for example gestures, you can use it for PoV and non-PoV characters.

Advanced writers can use body language to hint at secrets and lies. The characters’ words say one thing, but their body language another.

“Yes, tell me the rest of your life story, it’s so exciting.” She glanced at her watch. “It’s a pleasure to hear all about it.”

He hugged his arms around his chest. “I’m not frightened.”

His face paled. “That’s all right, honey. It doesn’t matter at all.”

If a character avoids eye-contact, this suggests that they’re not telling the truth or are hiding a secret.

“Don’t wait with dinner for me tonight, darling. Arabella and I will have to work late again.” He did not meet Sue’s eyes. “It’s a bore, but the workload is getting heavier every day.”

To learn more about the author, Rayne Hall, and where to purchase your books, please visit Meet the Contributors.

Let us know what you think Cancel reply